Space Bar = SELECT. A, S, D, Z, X, C Keys = Action Play Keys Check These Out: Personally I loved UMK3 the best because you were able to run and link combos with no effort and it featured more great characters. The other two in the series were great also through. Be sure to try and the fan enhanced of the orginal, they are all great, have fun. Want To Play In Fullscreen?: Hold down the CTRL key and scroll the mouse middle button up to zoom in and down to zoom out.

OverviewMortal Kombat is a landmark, and controversial, fighting game by Midway released in 1992. Intended to be a quick project before they moved on to a bigger-scale game within Midway, Ed Boon & John Tobias struck gold. Featuring live-action performers converted into fully-digitized 2D sprites instead of hand-drawn sprites, along with an excessive drenching of blood and gore, MK snatched the attention of the gaming world.

This game was the genesis of a monstrous franchise that spawned a multitude of sequels, a series of comic books, music CDs, a live tour, and two major motion pictures. To hype up the game's release on home consoles, Midway began a marketing blitz that labeled the game's September 14, 1992 release as 'Mortal Monday'. On that day, 16-bit versions of the game were released for the Sega Genesis and Super Nintendo. While the core game matched its arcade counterpoint, the two consoles had a very different gore level. In the Sega Genesis version, the game removes the blood, and modifies the fatality finishers to make them less offensive. However, the player can enter a 'blood code' that adds all of the original fatalities and blood back into the game. The SNES version, on the other hand, replaced all of the blood with sweat, and modified all of the fatalites.

Players can not change the settings to add the blood back in. Though the SNES version is considered to look better, the Genesis version was ultimately more popular due to the 'blood code.' 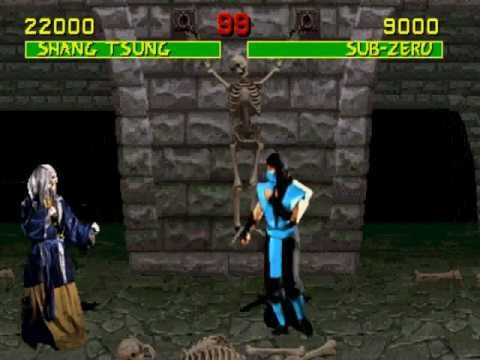 It was also packed into 'Midway Arcade Treasures: Extended Play' for the Sony PSP in 2005 and 'Midway Arcade Teasures Deluxe Edition' in 2006 for the PC. StorylineMortal Kombat was formerly a tournament of honor held within the Shaolin to determine the very best fighter in the world. The emperor of Outworld, Shao Kahn, longed to invade Earth and usurp it into Outworld. Unable to access Earth, Kahn sent a sorceror named Shang Tsung to do his bidding.

Tsung was unable to defeat the Tournament's Grand Champion, Kung Lao (the ancestor of Mortal Kombat II's Kung Lao). Upset with Tsung's loss, his youth was stolen from him as punishment. In his new form as an aged man, he was granted another chance, but this time it was not him who fought.

Tsung brought the 1,500-year-old Prince of the Shokan, Goro, to compete. Goro defeated and killed Kung Lao to become the Grand Champion of Mortal Kombat, plunging the good name of the Tournament into abyss.

The Tournament now has become Outworld's gate to the realm of Earth. The forces of Outworld needed 10 consecutive victories in Mortal Kombat to open the gates to allow a takeover of Earth. 500 years and 8 victories later, Goro is now 2,000 years old and Outworld is one victory away from domination. With Shang Tsung now the host of the tournament, he is ready for the 10th victory.

He keeps his personal bodyguard, Reptile, away from the public eye during his public hosting duties. Tsung personally invites the Elder God of Thunder & Lightning and protector of the realm of Earth, Raiden, to compete in the tournament. Liu Kang, a member of the White Lotus society and decendant of Kung Lao, enters the tournament for revenge. The Lin Kuei ninja clan marks Tsung for death and sends a ninja named Sub-Zero to assassinate him.

During his mission, he murders a ninja named Hanzo Hasashi. When the spirit of Hasashi arrives to Netherrealm, he agrees to sell his soul for a chance at vengeance. He agrees to forefit knowledge of his wife, child, and former life. Hasashi is now known as Scorpion. Kano, a member of the Black Dragon underground crime ring, has heard about Tsung's wealth and goes to the tournament with hopes to ultimately rob him. Sonya Blade of the United States Special Forces has been tracking Kano and follows him to the tournament, where she is kidnapped by Tsung himself and forced to compete in the tournament.

Hollywood actor, Johnny Cage, enters the tournament as a way to spite the United States media who believed his fighting skills were nothing more than smoke-and-mirrors movie effects. Gameplay & PresentationMK separated itself from the competition, most noteably Capcom's Street Fighter II, in a few ways. It was the first game of its kind to incorporate button presses to perform special moves instead of strictly relying on joystick-rolls. Only a few moves in MK required a button roll. It was also possible to perform a special move without pressing any of the attack buttons (Raiden's Torpedo).

Instead of holding back on the joystick to block a move, MK had a dedicated Block button, another first. The most distinguishing difference was what led it to the gaming promised land: the Fatality. The Fatality was a brand new concept in fighting games. The idea of performing a brutal murder to a defeated opponent was unheard of at that point. It also revolutionized itself in the same game as it was the first fighting game to incorporate significant environmental damage. When a match was taking place on the 'Pit' arena, instead of performing a character's fatality, an uppercut would send the opponent plunging to the bottom to be impaled by a bed of spikes amidst a party of corpses that had met the same fate.

Also new is the concept of a hidden fighter. A special opponent is unlocked when a certain parameter is met. When a match takes place on the 'Pit' arena, if you see silhouettes flying across the moon, then it is possible to fight a ninja named Reptile. The ultimate winner must win both rounds flawlessly, win their second round without hitting the block button, and perform a Fatality. If this is done, they will travel to the bottom of the Pit for a special fight against Reptile, who has the arsenal of both Sub-Zero and Scorpion combined. MK also featured a mini-game that popped up after every three matches versus the CPU or every five matches against human opponents called 'Test Your Might.' The game required the player(s) to smash certain buttons to build up a yellow bar.

Once the bar reached a certain point, the player could then shatter the object placed in front of them. The required point of breakage increased beyond every level. Test Your Might had five levels: Wood, Stone, Steel, Ruby, and Diamond. Shang Tsung is the game's boss and Goro is his sub-boss. Tsung has the ability to morph into every character, including Goro, and fight as them for a few seconds. With the combined introductions of a new control scheme, the excessive blood, and unadulterated images of gore and violence that had not been seen before at this point, MK made a lasting impact. CharactersPlayable Characters.